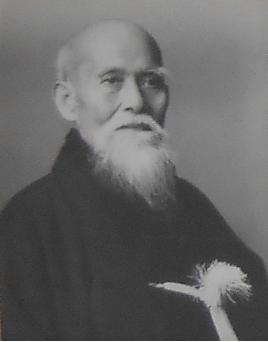 Aikido, that literally means “the way of harmonious spirit and energy,” is a modern Japanese martial art created by Master Morihei Ueshiba around 1920 and redefined after W.W.Ⅱ. Master Ueshiba (often called “O-sensei” or old master) had trained in classical martial arts such as Kitouryu jujitsu, Shinkageryu kenjutsu, Yagyuryu jujitsu, and Daitoryu jujitsu. Later, he also studied a version of Shinto religion called “Omotokyo” under Master Wanisaburo Deguchi. With his encouragement, O-sensei created an entirely new “true” martial art based on harmony with nature and love for people (both harmony and love are pronounced “ai” in Japanese).

Aikido differs mostly from classical martial arts in its emphasis on spirituality. While the objective of classical martial arts is simply to defeat your enemy or opponent, that of Aikido is to achieve harmony with your opponent by neutralizing his attack and persuading him that violence is futile. Thus, “friendly persuasion” is the spirit of Aikido as a modern martial art. This spiritual aspect of Aikido was further strengthened after W.W.Ⅱ when the pursuit of peace, instead of military strength, had become the fundamental Japanese national goal. Pre-war Aikido was only available to an elite group of people such as military, political and business leaders. After the war, O-sensei and his disciples opened Aikido to all people, not only in Japan but also abroad. Their mission was to promote harmony, peace and love among peoples of the world through physical training in Aikido.

Ki has a physical as well as spiritual connotation. Ki represents the flow of dynamic energy. Static “force” energy does not produce much effect, but dynamic “ki” energy does. Therefore, by mobilizing your own “ki” as well as leading your opponent’s “ki,” you can easily control an opponent with superior “muscle power.” For this reason, Aikido is suitable for, and indeed practiced by physically “weak” people including children, female and older people in addition to young males.

Aikido is unique in its method of training. Modernization of Japan after the Meiji Restoration in 1868 has made all martial arts obsolete and useless. Most Japanese martial arts have survived by transforming themselves into a competitive sport played within well-defined rules and regulations. Judo, Kendo and Karate are among such examples. Nevertheless, their objectives have remained the same, that is, to defeat your opponent. Aikido is different in that there are no competitive games or matches to determine a winner or a loser. Instead, Aikido training concentrates on “kata” or forms practiced by a pair whose roles are pre-determined. While “uke” or the attacker initiates an attack, “tori” or the defender applies a technique against the former. There is no limitation or restriction on the type of attacks, although most come from traditional kenjutsu moves. Not only open hand attacks but also attacks by a knife, a sword and a stick are allowed. Also, attacks can be made by a single opponent or by multiple opponents. Thus, you may appreciate that Aikido is a very practical and effective system of self-defense in today’s world.

Aikido is an effective method of physical fitness throughout one's life at a basic level. At the practical level, when necessary, it can be used for the purpose of self-defense. And, at the spiritual level, it helps you achieve the state of mind filled with peace and love for people.